How to Reduce World of Tanks Lag

World of Tanks lag has been troubling thousands of gamers around the world. The issues of lag and high ping have been taking away the fun of play the war game. If you are among those unlucky ones then you are at the right place.

World of Tanks is massively multiplayer, team-based, online action game which is dedicated to armored warfare in the middle of the 20th century. Players around the world have been facing issues of World of Tanks lag. Though, the best possible thing we suggest for reducing the lag is by the use of Kill Ping; there are also many things that one can fix all by himself.

Many players in World of Tanks just jump straight into battle ignoring any settings they could have done that would enhance their gaming experience. So behold a brief guide that will help you optimize your game to reduce World of Tanks Lag to a greater extent. Just check out some of the complaints players have in the game down below:

@worldoftanks when are you going to fix updating garage lag after each match?

So, now that you understand that World of Tanks lag is actually a problem within the game, here are just some of the fix which might help you get rid of them.

Open World of Tanks settings and start setting up your game according to your will. Here we will describe some of the important functions that need some tweaking for better performance. As the name suggests, this option lets you record your games so that you can replay them later. Turn it on so you know what blunders you might have made in your last match and how you could have avoided them.

As soon as you die in the game, you will notice how the screen becomes gray. Uncheck the box so that the game remains original color even after you die.

Whenever in sniper mode, if you fire a gun you will notice a knockback on the tank. While it looks amazing all it does is just mess up your aim. You can uncheck this box to aim much better after firing a round. Also turn on the following aspects as it can give you valuable information in the game

Commonly known as the crosshair, this setting refers to the various things you see in your gun sight. Since this is a personal preference setting all the things that you edit in this aspect won’t have any effect on the actual gameplay of the game. However, there is one thing that does that. 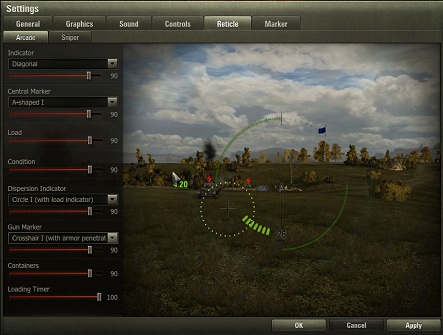 Choose the Crosshair I which comes with an armor penetration indicator. This setting changes the color of your crosshair depending on the penetration potential that you have for against the enemy. 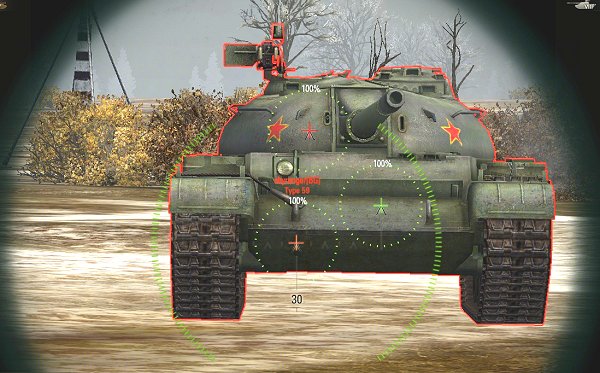 Like other videos games, lag spikes in World of Tanks can occur due to unoptimized graphical settings and options. As a result, it is crucial you understand what each of the options available in the game does and how you can optimize them for the best performance.

In case you are experiencing WoT lag, be sure to turn off this option as this can greatly reduce your frame rate during online play. 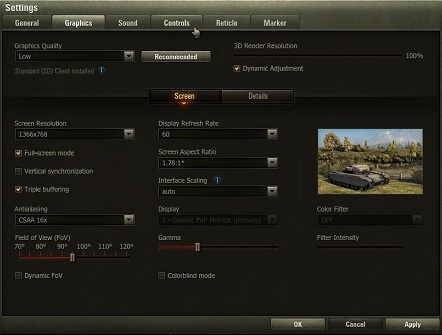 This option should be turned on as it smoothes the game and reduces lag and other related issues.

This is the number of details that are visible to you during the game. You can see the difference through a pictorial representation below;

See how the low texture shows the trees and how detailed it is seen in High Texture.

The texture filtering option allows you to see distant objects much clearer. This is also the factor that reduces the blur in far objects. Use Point for the worst and Anisotropic 16x for best results. Keep in mind that this setting can drain a lot of memory so you might wanna make sure if your graphic card is up to the task or not.

Turn off the following options.

The above-mentioned aspects should be turned off or set to the lowest settings as they can greatly drop your frame rate in the game and lead to WoT lag.

The Advanced Post processing option should be turned off as it blurs various objects in the game. The process tends to combine rendered objects in efforts to provide a more natural appearance. This, however, blurs distant objects which are quite annoying in the game when you are focusing on other important aspects.

Here is a picture to show you what exactly is meant:

The option should be set to max as the amount of terrain that is visible to you depends on this factor. You can see the difference below:

This option should also be set to high as this also renders more clear objects in the game.

These effects tend to create smoke in various instances like barrel smoker or barrel flash. Since all this does is obscure vision, you just wanna stick to turning it off.

Just turn it off as all it does is show dirt while your tank is running over muddy terrain.

The above settings cover many major points of the game that can greatly enhance your gameplay and assist in reducing lag. If for any reason, you are still not getting the results that you desire, we suggest you try and use Kill Ping to decrease your WoT Lag. There is also a detailed guide on how you can reduce World of Tanks high ping through Kill Ping.

Here’s also a picture for you to compare how effective Kill Ping can be in reducing Lag. 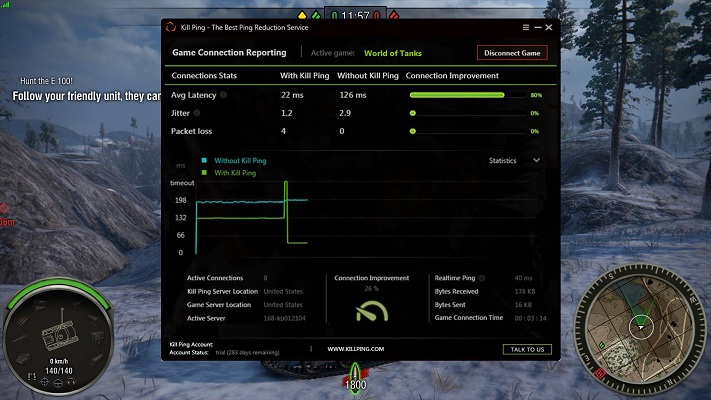 So, in order to get rid of World of Tanks network lag, be sure to optimize your PC in terms of your network connection. This includes opening ports, port-forwarding and altering router settings for increased performance. Furthermore, it is highly recommended that you switch to a wired connection if you rely on wireless as this will greatly aid you in lag.

Probably the finest way you can overcome your lag issues in World of Tanks would be through Kill Ping. You have seen above the results that you can get when playing WOT with Kill Ping. And the entire technical aspect behind it further solidifies the statement.

Kill Ping can be the ultimate savor for players who have been facing lag problems for quite some time. Here is another pictorial representation to show how Kill Ping works its magic to solve lag issues for players throughout the world. To learn more about Kill Ping and its many services, head on over to the official website for more details. Tell us how much you have benefited from the guide, and how effective Kill Ping has been in reducing your World of Tanks lag. In case you haven’t used it yet, we suggest you start its free trial right now.