Overwatch Figurines And Where To Find Them

Overwatch Figurines are something that the game fans love to have by their side. While there are many ways through which one can treat himself with the love for Overwatch, figurines come as an integral part of such collectibles. However, selecting the one for you can be tough.

From over a thousand Overwatch figurines to choose from, it becomes a difficult choice to choose the perfect one for you. Obviously, you would have a favorite hero in Overwatch whose figurine is something you should buy, but for those who still haven’t figured out their favorite one making up the mind can be frustrating.

So after a ton of research and analysis; here’s our list of the best Overwatch figurines that a fan must have. 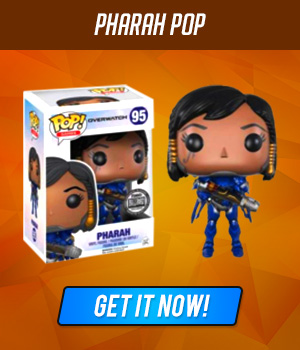 First on the list of Overwatch figurines is the pharah pop. If you have Pharah as your main in Overwatch then this pharah funko pop is the thing for you. This figure comes with its own box and is the best thing you can have if you are in love with the hero.

The Pharah figurine has been among the most desired collectibles for the hero as Pharah players just love the feeling of having their very own mini pharah pop protecting them from above the table if not from the skies. So if you consider yourself a true fan of Pharah then do note that this Pharah funko pop should definitely be something that you add to your list of must-buy things. So others the true fan that you are and get the this funko pop now. Next on the list is the cute looking gorilla from the lab. Winston has been a hero who although is a pretty ass-kicking addition to the team, is tough to play with for that reason fades from the limelight that is taken by heroes like Tracer, Genji, Hanzo or Reaper.

However, Winston if in good hands can literally halt the opposition in their place making him one of the strongest heroes that nobody messes with. Due to Winston’s awesome design and close to perfect in-game representation his funko pop enters the list of the best Overwatch figurines which are a must buy for you. So quit thinking and charge onto the enemy with this super cool Winston figurine. One of the reasons why the game became a huge hit was because how different heroes were able to bring in gamers from different genre to a single game. For FPS ones, especially those coming from Counter-Strike and Call of Duty, Soldier: 76 was a getaway that allowed them an easy entry to Overwatch.

For all those who consider the old man as their favorite hero in Overwatch, having this funko pop might be the least thing they can do to show their love. If not, it’s still a pretty cool thing to have. For many however, Soldier 76 figurine is still their go-to plan if things are not working out. So if Jack Morrison is you main in Overwatch then having his Overwatch Figure is something that you must have by your side. Die, die, die? That’s the one thing every Reaper player loves to do if he has placed himself in a good position to take everyone out. You might think of Reaper has a hero who is pretty easy to play with considering his abilities that allow him to move in and out of fights as well as his high damage dealing shotguns.

However, Reaper is pretty easy to take down and hence it would take quite a time and efforts to master. His mini version Overwatch figure isn’t that tough to be accustomed to and will happily stay wherever you want him to be. Place it anywhere in your room or your gaming table and let the reaper guard you will you play. It all started with the fight between Widowmaker and Tracer that kinda sparked everything for Overwatch. Widowmaker through her keen senses and deadly aim made her place for being one of the most picked heroes in the game. Much like Soldier: 76, Widowmaker’s addition to the game allowed a lot of FPS players especially those with the love of snipers to enter the game.

Although not your classic Sniper type, Widowmaker brings in a lot more to the table due to her ability to move into tricky/ unreachable areas and her ultimate that lets her see through walls. The Widowmaker Overwatch figurine likewise is something that you should have if you have been a sniper fan all your life.

Out of all the love and hate that the hero has received in the game, the least we could do is get this Tracer pop to show our love to the hero and the record breaking game that we are addicted to.

The Tracer figure claims the first spot in the list because of how awesome and famous the hero has been in the game. Out of all the heroes that Overwatch has to offer, Tracer has been the favorite of everyone. Even if Tracer wasn’t a liable pick in any match, the hero was picked for the fun of it giving us the idea of how much love Tracer has received by everyone.

The Tracer Overwatch figurine likewise has also been one of the most bought collectibles for Overwatch and it definitely makes sense.

What do you think?

So this was our take on the best Overwatch Figurines that we recommend you to have. If you are a true fan of Overwatch then probably you own any of them already. If not, then we advise you to do so and make yourself in the list of dedicated fans of the game. Tell us what you think about our list and if you think we might have missed any then do let us know.