Lower ping in League of Legends is something that everyone wishes for. If you are also looking for ways to do that then here are a few tips and tricks to do that.

League of Legends has now become a game that has diehard fans in the hundreds of thousands, if not millions around the world. While, we love every second of the time we spent on it, the fun of it turns awry and this beloved game becomes a ride of frustration if players are troubled with LoL ping.

The good, as well as the bad thing about the problem, is that there is no definite way on how to lower ping in LoL as you have to try several things to know what works and what does not. And this is why it is good because in many cases doing the slightest of tweaks are enough to solve the problem of LoL ping.

Among the many different ways on how to lower ping in League of Legends, here are some basic points that can be considered as a benchmark to clearly identify the fault and reason behind your increased League of Legends ping.

If you seek to reduce LoL ping then closing any background updates and downloads should be your first priority every time.

Wi-Fi in many cases can be the cause of the problem. Yes it is good and all to play your favorite game with no strings attached to your computer, but if you want performance then comfort should be the last thing on your mind. Furthermore, Wi-Fi is relatively unstable and the ratio of packet loss on such wireless devices is high when compared to a wired connection. Especially if you are using Wi-Fi that is far from your computer, your connection is more likely to hamper. This is the reason why a lot of emphases is given to LoL players that they switch their connection to a more efficient wired one to save themselves from packet loss and help get rid of LoL high ping.

If you a living alone then this one is not for you. However, if you are not that lucky to be an independent hardcore gamer that you know what we mean when we talk about bandwidth consumption. No matter what internet package have you opted to go for, if there are other people using the internet, then you will face increased League of Legends ping. The way this works is that your bandwidth gets divided by the number of people currently using the internet. And if someone is in for some streaming then you will be lucky to even land a spell. If however, you have some technical side to yourself, then it is advised to allocate the maximum bandwidth to your computer so that your game doesn’t have to suffer even if someone else is also using the internet. Otherwise, all you can do is make sure that no one is leeching onto your bandwidth when you have finally made up your mind to play a few games.

The firewall of your computer, as well as the antivirus that might be installed on the computer, is constantly checking the data packets that are being sent or received from the computer. Due to this, some packets might be getting blocked and you might be facing increased LoL ping as a result of that. In order to save yourself from this trouble, add League of Legends to your windows firewall. You can also do that in the advanced settings as shown in the picture below. 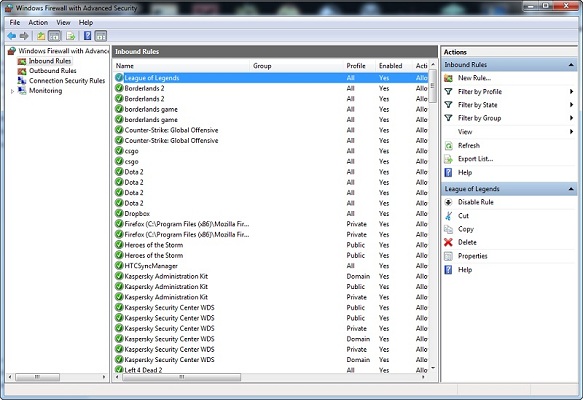 If you want to decrease League of Legends ping then closing any background updates and downloads should be your first priority every time. Simple open up the task manager and get rid of all background applications that you think might be leeching onto your bandwidth with auto downloads and updates.

In case you wonder if your PC is up to the task of supporting the game, take a look at the minimum PC requirements for League of Legends;

No matter what internet connection or the type of gaming monster you have under the table, if you are not selecting the correct server to play league of legends, then there increased LoL ping is imminent. Hence, make sure you have selected the servers that are closest to your regions so that the distance between you and game servers can be the minimum. Having shorter distances greatly increases your chances of having a smooth LoL experience.

Going One Step Ahead

After doing all the things that have been suggested above, if you still haven’t achieved the desired results then the problem lies with the connection that has been made between you and the game server. Data congestion and inappropriate paths mostly are the reason why people experience increased LoL ping.

Kill Ping in this regards can save you from this problem as its dedicated routing paths give you that extra edge you need to get lower LoL ping. Furthermore, Kill Ping’s 100+ servers also make sure that the distance between you and the game server is as lowest as possible. This helps in achieving lower League of Legends ping rates in the game and eventually players experience a LoL ping decline of up to 60%. Apart from the daily routine of trying to get a lag-free gaming experience for the game we love to play, it is also important to show how true we are to the game. This is why having some cool League of Legends collectibles becomes a must for hardcore League of Legends fans.

If you are one then head over to the Kill Ping online store and get something for yourself. Hurry up as some products are on exclusive discounts just like the awesome Tryndamere Sword Keychain and League of Legends Ring that you can get by just paying the shipping only at Kill Ping Online Store.

Get Lower League of Legends Ping Only With Kill Ping A Short Guide To Fix League Of Legends Lag On Comcast