Grand Discount on all Overwatch Bracelets 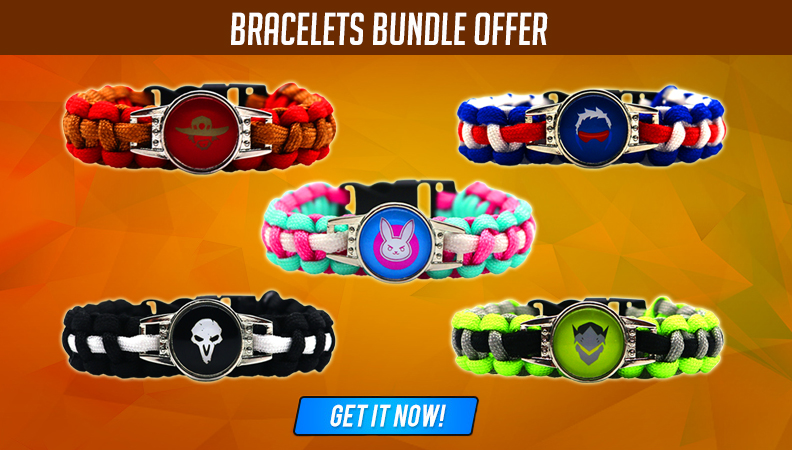 Overwatch fans, we’ve launched a special offer for you all. Now instead of one get any five Overwatch bracelets at an amazing 60% discount. Originally, the price of one was $15.99 and if you get five of them the total amounts to $79.95. However, seeing its popularity, Overwatch bracelets are already been given out at a 50% discount where every one of them can be bought at only $7.99.

Now, however, we’ve lowered the bar even more by offering a 60% discount on getting a bundle of five. So there’s more of Overwatch awesomeness at an even further discounted price. Select any five of these awesome bracelets and make them yours at only $31.99. Don’t miss this exclusive chance of getting more bang for your bucks and having Overwatch merchandise you’ve always wanted.

We have a good news Overwatch fans. The Kill Ping Online Store brings you yet another awesome deal you wouldn’t want to miss out on.

This time around, you can get your favorite Overwatch bracelets at an exclusive 50% discount. Now is the time to get what you’ve always wanted. It’s time to own one of these bracelets and show off your love for the heroes and the game.

Firstly, we have the classic Overwatch Logo Bracelet that is ideal for anyone who plays the game irrespective of their main heroes. No matter if you are a fan of the Evil Mei or like to jump around with Tracer. If you love Overwatch, then you must own this logo bracelet to show off your love and style. Within the Overwatch world, Zarya might not have many followers. But those who are; are diehard fans of the hero who would love to get hands on anything that is related to the hero. Sadly, Blizzard hasn’t been kind enough to give Zarya fans what they need. Kill Ping Online Store hasn’t ignored you, however, and the Zarya Bracelet is there for all those Zarya mains. If your main isn’t beautiful, it doesn’t mean that you can’t have his collectibles in your home. Roadhog, for a pretty long time, has been one of the most OP/ broken heroes of Overwatch. That, however, hasn’t stopped him from being a favorite for many. And for all such Roadhog mains, this Overwatch bracelet is a must-have merchandise. The hero that gets the least amount of appreciation in Overwatch is probably Mercy. But that doesn’t mean we are also going to ignore the sacrifices made by the hero. The Mercy bracelet is for everyone who is a support for their team. So own this awesome Mercy bracelet and show off your support in style. We all love to hate Mei. But that’s not our fault because after all, that’s how she is. Nonetheless, Mei is one of the strongest heroes, and the biggest nuisance of the game. But many love her for that and for all such mains, getting the Mei bracelet is the least they can do to show their love. Sombra wasn’t getting the attention that she deserved and so she tried to hack something other than just computers and networks. The Sombra Bracelet is what you get after she puts her expertise to something more creative. We just made that story up but if you are a Sombra fan, then you should own this Sombra bracelet. Lastly, we have everyone’s favorite hero, Tracer. There’s probably a lot of Overwatch collectibles that you can find related to Tracer. But what to buy is the question that you might ask. Well, the Tracer bracelet is a pretty stylish collectible that you can show off. So for all the Tracer mains out there, this would be a good start for you. Reaper has been among those few heroes in Overwatch that gained popularity in a very short time. This has also been due to the early animation videos of the game where Reaper could be seen being a bad-ass. If you are also one then this cool Reaper bracelet is just for you. Soldier 76 has been our go-to since we come from those FPS genre. Likewise, if you are also among those FPS gamers then Soldier might be your love to. So show some love to Jack Morrison and get this super awesome bracelet for yourself. Although the toughest hero in Overwatch, it hasn’t stopped him from being the favorite of thousands. Genji might be difficult to master, but those who have done it can single handedly change the game. For all those hardcore Genji mains this is the thing that you should buy for yourself. Symmetra is among those important characters of the game who although don’t get much recognition are still a force to be reckoned with. Her combination with other heroes has made Symmetra a deadly asset to have in game. If you are one of those campers who love to land shots from far locations then Widowmaker is your best bet. Honestly, she was the reason why I had an easier transition to the game after spending so many years in CS. Having the Widowmaker hero bracelet is the least one could do to show love to the coldblooded sniper. The story of Hanzo and Genji has made many stick to the game. While some prefer the cyborg ninja as the better hero, you just cannot ignore that Hanzo’s ultimate is simply the most awesome and damage dealing power in the game. Landing it however requires skill and his arrows also take some time to master. Hanzo main? This is why you should be buying. Supports do not get the love that they need. Zenyatta sadly also is among those unlucky ones that deserve more love in the game. As a support player getting the Zenyatta bracelet would be the least that you could do to show some love. The not so dumb monkey is probably the only hero in Overwatch who can be a nuisance to flankers. Honestly, heroes like tracer, genji can really be a pain in the butt. But if you’ve got the banana lover by your side then such heroes are unlikely to cause any trouble. But like others Winston take time to be good at. While you take your time doing it, you might need the Winston bracelet for some extra motivation and show off. The only real tank that you can think of. Seriously, there’s been ages since we’ve since any game without Reinhardt as the frontline. The amount of power, protection that Reinhardt brings to the table is simply unmatched. If you are one of those Reinhardt only players then this Reinhardt bracelet is just the thing for you. Probably the only support hero who is really fun to play. Lucio has been the one true love of many support Overwatch players around the world. If you are one of them then the Lucio bracelet is what you should definitely have. So you like to rain justice from above? If so then this super awesome Pharah bracelet is the best way to show your love to Fareeha. Bastion is love for anyone who just wants to bestow insane fire damage onto enemies without doing much. But honestly, if you want to take out entire teams in choke points then Bastion can do it for you. Similarly to Bastion, Torbjorn is also your go to hero for heavy fire damage in key locations and where holding ground is important. While there might not be much Torbjorn mains if you are one of those then the Torbjorn bracelet is for you. ; As of now, all the Overwatch Bracelets mentioned above are available at a whopping 50% discount on Kill Ping Online Store. You just have to pay $6.99. Along with the discount, you get free worldwide shipping facility. Hence, if you were having second thoughts, then this offer would help clear up your mind. Hurry up Overwatch fans, as this offer is there only until stocks last. So better move your hands quickly.