For online gamers, facing network trouble isn’t a new thing. Here are five of the most common issues along with solutions to fix ISP routing problems for good.

No matter what online game you play, the inevitable problem of network connectivity plays its part and results in a bad user experience of gamers. To fix ISP routing issues, while one does all in his powers, the results aren’t satisfying as players end up think if all their efforts were to waste.

The fact of the matter is that, fixing ISP routing issues is easy if you know what you are doing and have properly rectified the area of concern. Unless this is the case, no matter how many bucks you put into, the outcome would remain the same.

To save you from the trouble, we at Kill Ping have rectified some of the common problems that are left unnoticed. So without further delay, let’s see them and fix your ISP routing problems.

To make sure of the actual cause of the problem, it is first important to know where this problem is actually happening. To do this, we first have to ping a target location (possibly the game server for the game you are playing). No matter the game you play, you are connected to a particular server that is the main platform for you to interact with others on the game. Each server that is placed in different parts of the world bears a specific IP address through which your computer connects to.

So pinging that particular location as well as doing a speed test will give you a better idea of the root of the problem. If you run a speedtest and the results are something as shown below then try pinging the game server now. 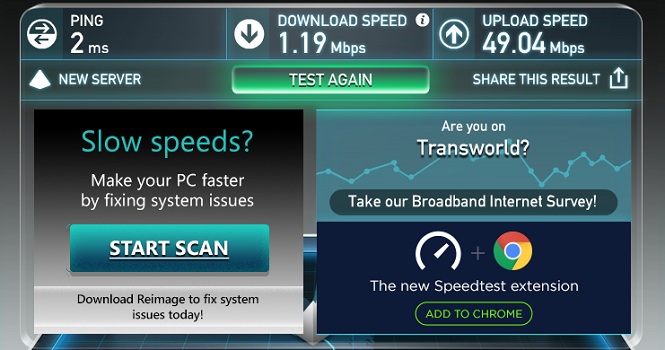 Based over the results, it is pretty clear that our connection till our ISP’s gateway is as good as it can be. So, obviously the problem lies on the other end. Now is the time to ping the game server to check for more leads As seen from the image, the ping averages around 200ms which means that a single packets takes this much time to travel from the computer to the game server. Do note the highlight portion which shows 900ms and is considered a ping spike. This will be discussed later on.

Now, that we know the ping connection, we can identify in detail of how this time is divided on each hop to further assess the situation. Go to your command prompt and perform the traceroute of the game server. In case of the same server that we used above, you will type something like below;

Tracert sgp-1.valve.net
The results are shown below Obvious from the results, the problem is definitely on the other side and there isn’t much you can do in this regards to fix ISP routing issues. If this wasn’t the case and you were having high ping times on your end then do let us know and we will cover the in a separate article.

As for now, since the issue isn’t on your end, which is mostly the case for users, the best recommendation for you is the use of Kill Ping. The reason why Kill Ping becomes the only possible solution is because of its improved routing algorithms that take game data through a different path preventing high ping times and data congestion.
As can be seen for the trace-route picture above the reason why high ping times were observed is due to the data clutter and inappropriate routing paths creating a delay. However, this is what Kill Ping saves you from and provides the best possible game connection between you and the game server making sure you get only the best experience. Try the steps mentioned above, to first make sure of the problem that you are facing and then give Kill Ping a try. Hopefully, you will be able to fix your ISP routing issues once and for all.